How to grow healthy plants, even with high salinity levels

What is the difference between salinity and sodicity?

Salinity by definition is the measure of the amount of salt in the water while sodicity relates specifically to sodium presence in soil.

These are two often-related areas­ – but not necessarily. Salt is not necessarily sodium chloride. That’s table-salt! Salts can be calcium carbonate, or magnesium sulfate, or umpteen other combinations as well as sodium chloride. High levels of sodium in soil will make a soil sodic occurring either naturally or from high-sodium and/or high SAR (sodium adsorption ratio) waters. And sodic soils have a horrible dispersive, hard-setting and easily compacted structure.

Well-structured soils have plenty of exchangeable calcium. Poorly structured, dispersive, sodic soils contain high levels of exchangeable sodium where there should be calcium. Calcium holds soil particles together, ensuring stability, root penetration, water infiltration and aeration. Sodium ions have only half the charge as calcium ions, so therefore will hold particles weakly. This means the bonds fall apart, leading to compaction, poor aeration, poor infiltration and root penetration. High levels of soil magnesium have a similar effect on structure.

What can be done about that? Replacement of calcium ions (commonly through gypsum), drainage (ripping) and leaching of sodium ions. Additions and maintenance of soil organic carbon will also assist in rebuilding healthy soil structure.

High levels of soil magnesium, often indicated through a low calcium to magnesium ratio, tend to have a similarly detrimental effect on soil structure. This is what happens when you water your soil with high-sodium waters. 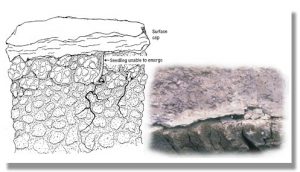 What happens when a soil becomes sodic (too much sodium)

Now, salinity is a different matter. Saline waters often contain high levels of sodium, therefore all the above may well still apply. Your water test will show this. Salinity will show up in your water test as a high EC (electrical conductivity).

When there is salt in the water (or in the soil-water, because of salty water and/or salty soils), it is extremely hard for a plant to take a drink.

The plant uses its energy from evapotranspiration to draw water from the soil. But when there is salt present, it becomes harder and harder. Water moves from the soil into plant tissues by osmosis (the passage of water from a region of high water concentration through a semi-permeable membrane to a region of low water concentration). Where there is salt in the soil and soil-water, the salt in the soil/water draws the water back to itself. Therefore, the saltier the soil and soil-water, the less water is taken up by the plant. The plant is stunted. If it’s very salty, it may eventually die of thirst.

The other important issue is this – when you apply saline water to the soil, much of this water evaporates. The water evaporates, but the salt does not! Generally, the more you use saline water, the higher the concentration of salts you will create in the soil.

So, whilst a moderate salinity water may not show up immediate problems, it may well become a problem in the months and years ahead.

The same osmosis issue applies when saline waters are applied to plant foliage, especially on the more sensitive crops. The water evaporates, leaving minute crystals of salt on the leaves. These salts will then draw moisture out of the leaves into themselves, resulting in dead patches and spots on leaves, or even dead leaves or dead plants. 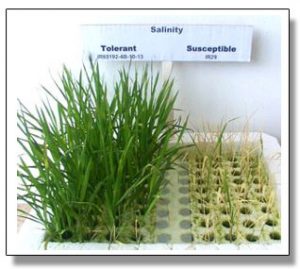 What happens if I have a high salinity level in my garden or irrigation water?

High salinity level will have detrimental effects in a number of areas:

What can I do if my water has a high salinity level?

The most effective and environmentally friendly treatment for high salinity is simply, the use of magnets. These magnetic water conditioners can enormously reduce the build-up of sodium in the soil, and will generally assist in leaching built-up soil sodium, allowing you to keep using the treated water without detrimental results.

Improvements that can be expected when treating high-salinity water with a magnetic water conditioner include:

close
Start typing to see products you are looking for.

close
No account yet? Create an Account
Scroll To Top
We wish to advise that our office will be closed from Friday 17th December 2021 @ 1pm. We will reopen Monday 10th January 2022 @ 9am. Management and Staff would like to thank you for your continued support and look forward to continuing our relationship in 2022.
We use cookies to improve your experience on our website. By browsing this website, you agree to our use of cookies.
Accept